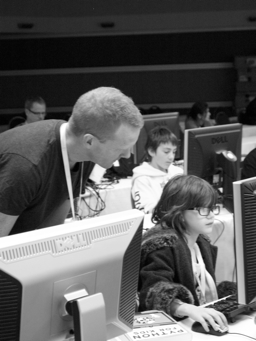 It started with the Young Coders tutorial where I had the privilege of helping out as an assistant. The kids were amazing. Barbara Shaurette and Katie Cunningham were amazing. It was awesome.

The next day I popped in to help set up that room again but then spent the rest of the day focusing on my afternoon tutorial teaching people to write games in Python. It was packed - 35 or so attendees had signed up but then a bunch of the kids from the first day of Young Coders also came along to watch and learn. Including an 8 year old girl who told her dad she wanted to write video games. Awesome.

Then the conference proper started with an inspiring opening speech by the conference chair Jesse Noller about his vision of Change the future - education, outreach, politeness, respect, tenacity and vision. A broad, ambitious and awesome vision, and one I can fully get behind. Then Eben Upton took the stage to tell us about his journey with the Raspberry Pi project and a little of his vision. Lots of similarities. And then everyone got a Raspberry Pi. Awesome.

People wanting help figuring out how to teach kids to program their Raspberry Pi could try the free Raspberry Pi Education Manual PDF.

I spent a lot of time during the conference split between talking through various things in the hallway (I'm the Cheeseshop BDFL and there's many things afoot there and PyCon is a great time to move things forward very quickly), and spending time in the Raspberry Pi lab, chairing talk sessions for amazing speakers and generally having my mind awesomely expanded.

I taught many people the basics of pygame. I ran into the Kivy developers, and talked to them about the Pi. During the sprints they ported Kivy to the Pi and even developed some simple games using Kivy, the Pi and some simple hardware sensors (I'm playing the game with a tilt sensor).

I had an inspiring conversation with James Bennett during which a light went off in my head and the result is Python Enhancement Proposal (PEP) 439 for "Inclusion of pip bootstrap in Python installation". (apologies if you get a badly-formatted version; it should be fixed shortly.)

I'm exhausted. The people here - the community - is amazing and vibrant and brilliant and huge. 2500 people at the conference, 20% women. Awesome.

Seriously, look how many people were there...